Showcasing the Art of Arizona

Enjoy all the colors of the desert with amazing murals in Arizona’s largest city.

In Phoenix, the thriving and vibrant street art scene offers a glimpse into what makes the fifth-largest city in the United States tick. While murals are found in all parts of Phoenix, most are in downtown and the arts district, known as Roosevelt Row. The area stretches from McDowell Road south to Van Buren Street and from Central Avenue west to Seventh Avenue.

This vibrant locale is the perfect spot to not only take in the Phoenix art scene, but also sample delicious local foods, drinks, and shops. Check out this small sample of the unique art you’ll find along your journey. 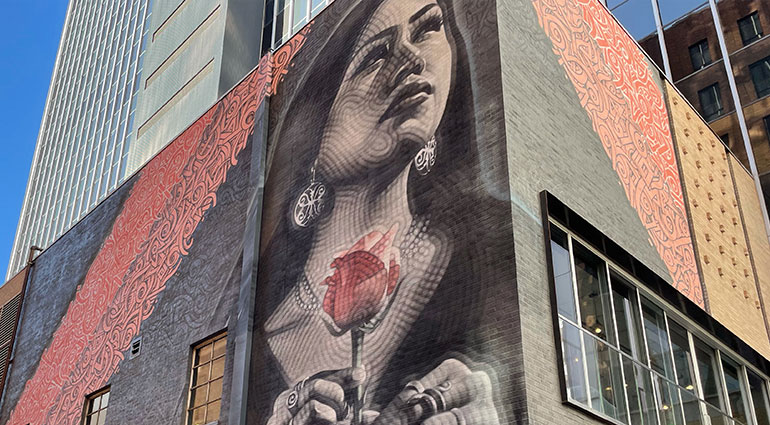 Take a break: The Hidden Track Cafe and Bodega, in the building where the mural is painted, serves artisan-style coffee and specialty drinks like horchata iced coffee. 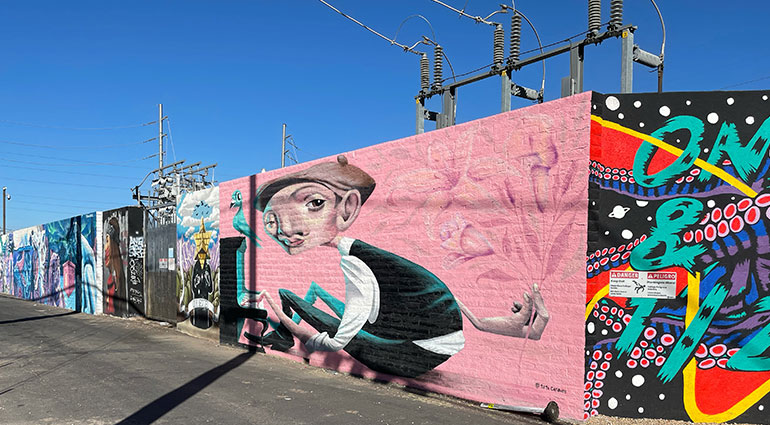 Less than a mile away is Mural Alley — commonly called 1 ½ Street. It’s at the heart of the Roosevelt Row district but can be hard to find. Even locals will tell you it’s hidden in plain sight.

Need directions? Head to The Churchill, an open-air food and boutique pavilion. When you walk behind the building, you’ll see a dozen works by local artists, extending the length of the alley. It features motifs from Arizona’s iconic landscapes to her indigenous roots.

Take a break: Inside The Churchill, you can browse State Forty Eight, a local shop selling fashion-forward apparel proclaiming Arizona’s position as the last state admitted to the contiguous United States. 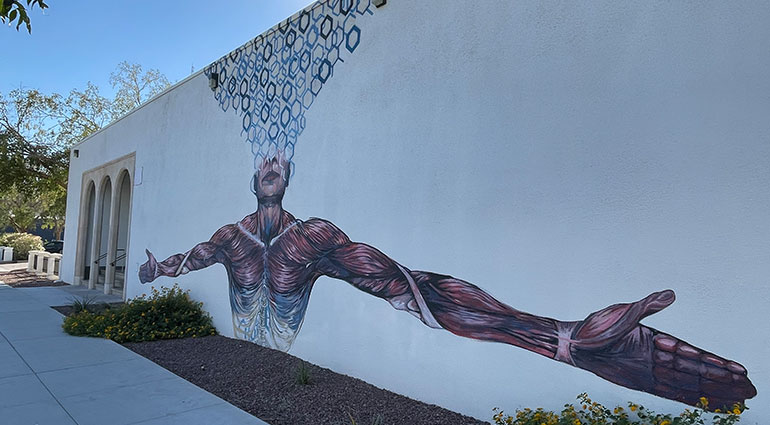 Just over a block away is the nondenominational Roosevelt Community Church, site of the appropriately named Open Arms mural. Attributed to local street artists Bishop Ortega, Larry Valencia, and Anthony Vasquez, the mural’s name — and location — speaks to its message of welcoming and inclusiveness.

Take a break: Head a block away on Roosevelt Street to Carly’s Bistro, which features soups, sandwiches, and salads for lunch or light dinner in a friendly, artsy environment.

Just around the corner is a craft beer, wine bar, and bottle shop called The Theodore, which serves some of Arizona’s top brews. Outside, you’ll find the Theodore mural painted by Tato Caraveo. The artist puts a surrealist spin on the 26th U.S. president, Theodore Roosevelt.

During his nearly two terms in office in the early 20th century, Roosevelt’s leadership made a big impact on Arizona. He signed an executive order for the Grand Canyon to become a national monument, and supported the National Reclamation Act, which led to the construction of the Roosevelt Dam.

Take a break: Venture inside The Theodore and sample local brews, like the Hoppy Amber Red Ale from Tombstone Brewing Company or the Stoic Javelina Rosé from Prescott’s Stoic Cider. 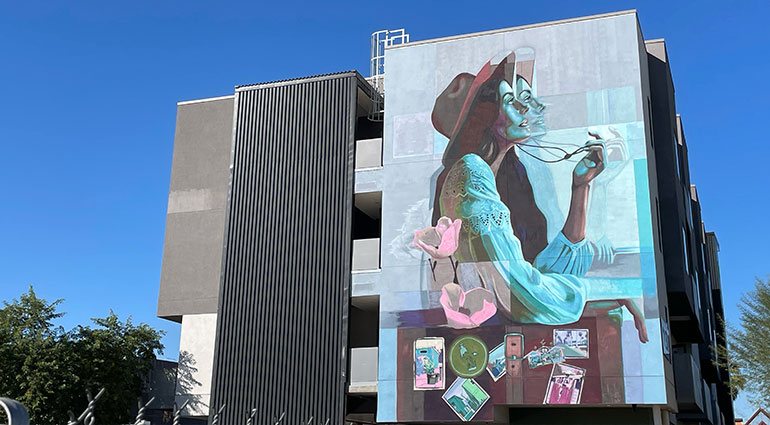 Two blocks north on 2nd Street, check out La Musa mural by Clyde Graffiti on the side of the En Hance Park Condos. This mural, depicting a woman looking for her next adventure, suitcase in tow, is sure to touch the hearts of all travelers.

Take a break: Relax in nearby Margaret T. Hance Park or visit the Japanese Friendship Garden inside the park. 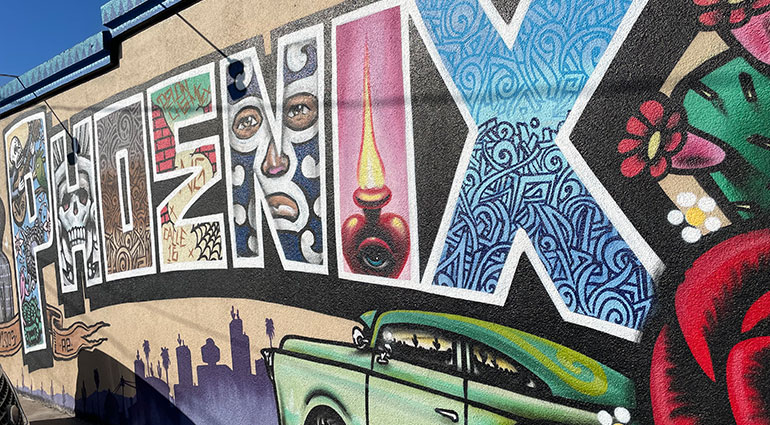 For the final stop, drive 2.5 miles to one of the city’s most recognized murals. The mural on the wall of Barrio Café is a colorful collaboration between several of the city’s top street artists. Open since 2002, the restaurant has garnered rave reviews, and its founder-chef Silvana Salcido Esparza has been nominated for a James Beard Award.

Take a break: Barrio Café is a must-stop for authentic Mexican dishes like chiles en nogada or cochinita pibil.

Plan your Arizona getaway at:

Visit your Owner Dashboard to reserve.

Vistana Signature Experiences, Inc., and its affiliates and subsidiaries make no warranty, express or implied, as to the condition, capacity, performance, or any other aspect of the activities, events, or services provided by third-party vendors. Certain activities, events, or services performed by third-party vendors may currently be unavailable or limited due to COVID-19.

The examples provided herein are subject to change. Certain amenities, activities, events, or services may be unavailable or limited due to COVID-19. For the most accurate updates on resorts and amenities, visit the Resort Updates Hub.